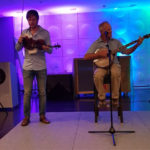 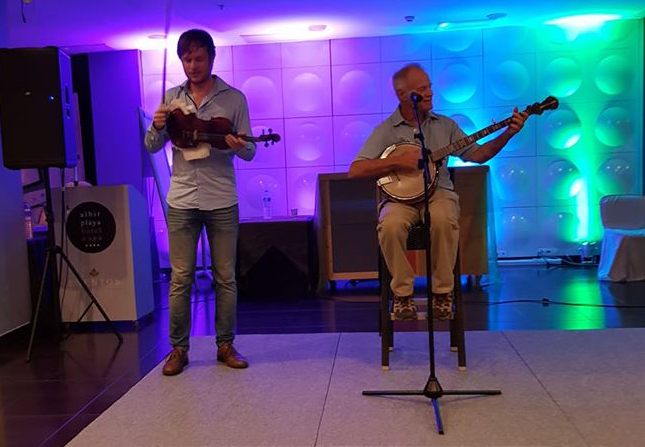 Monday, November 4. And what a big day it was! I didn’t think I could get it all together, what with performing a song on a very questionable banjo that I was not used to playing, plus giving my big farewell talk. Neither of them felt they were coming together adequately. Luckily, I wouldn’t have to think about it until 6:00 PM after the long afternoon break. But pretty much from the time I walked into that room and throughout the day, people kept coming up to me to sign their books or get photos taken with me. I felt like a mini-celebrity (very mini), which feels a bit uncomfortable to me (but I secretly love it—in small doses). Mostly, I’m just really happy and humbled that I’ve been able to touch a number of people’s lives. Somewhere in the shuffle I was able to reconnect with my old, long-lost Danish friend, Suzann, from past trainings and we had a nice talk. The day before she’d handed me some photos she’d taken from past times we’ve been together, including some beautiful shots of Richard in the caves, and I looked at them last night. Brought back so many memories. Unfortunately, during the morning session I had to miss my first-ever Lise Dandanell “Finding Your Voice” singing workshop because I had to go see and support my friend Kay’s (along with Maureen and Sue’s) Overcoming your Diagnosis cancer survival breakout session. Really powerful. After the session, it was tough tearing Kay away from the many people who wanted to speak with her so we could have our scheduled lunch. We hadn’t spoken or seen each other for so long! The last time I’d seen Kay was 3 or 4 years ago when we went on the Magical Mystery Tour together in Liverpool. Shortly thereafter she was diagnosed with severe cancer, then underwent a series of chemotherapy treatments and operations. It’s been a really long and hard haul, but so far—knock on wood—she’s come through. She’s an inspiration! After lunch we took a walk down to the beach and lay in the sun for a short time. I looked up and way up in the sky saw a very strange light. It started going around in a circle, then straight ahead quickly, then disappeared. Then another one appeared. I said, “Kay, what’s that?” She saw it, too; I wasn’t seeing things. They disappeared again and came back again, moving unlike anything we’d ever seen. We concluded we had just seen our first UFO. I thought maybe it could be a couple of drones, but I’ve never seen a drone move anything like that. When we first got to the Viva hotel after the break, I arrived with the banjo covered by my light jacket to keep it hidden as a surprise. Immediately, Fredrik and I stole away to a back room for a brief practice session. That made me feel a little more comfortable. But I was still unsure of the words and chords to the second song, and I still felt very unprepared to give my talk. After a bunch of talented performers Fredrik went on with his fiddle and rocked the joint. During his two songs I picked up the banjo “backstage” and discovered the shoulder strap had broken. I was growing more and more nervous. I managed to secure a tall stool-like chair so I could rest the banjo on my thigh and walked out there to join Fredrik. I first played “Lodi,” which was okay but the banjo kept slipping off my thigh, so I had to take a couple of breaks in the action to move it up. Then I told the audience I had a gift to give them and I sang, “I’ll Remember You,” a semi-obscure but beautiful song by Bob Dylan. I had given Claire the words and told her to call them out to me if I forgot a line, but I remembered it all. It came out well enough to earn me a standing O. Then Lise, the professional singer, sang “You’ve got a Friend” incredibly beautifully. Sue announced a short break and after thanking everyone, it was my turn. I felt woefully unprepared. Sue and Sheela gave me a very touching introduction. Sheela was in tears and I almost lost it. But I gathered myself and suddenly I simply fell into a feeling of love and gratitude. I have no idea what I said, but my topic was Hope for All. (I forgot to even mention my book of the same name.) At one point toward the end I called Dicken and Bill up on stage and said, “These guys are the real deal,” because they are the personification of being in service. As soon as I said that I knew I needed to also call Gabriela up on stage, because she really is Ms. Being of Service. During the talk I saw a few of my friends in the audience in tears. It was a little tough to hold it together. Whatever I said or did, the feeling felt great and again I got a big standing O. And I walked off stage knowing it was my last. But Sue and Sheela called me back up on stage to give me a gift, a great likeness drawing/painting of me with the statement that had come through me, “All we are is peace, love and wisdom and the power to create the illusion that we’re not.” Wow. That was really beautiful. Not sure what I feel about retiring because it was all such a high for me. But I am. I’d better quit while I’m ahead. I packed late into the night.

Tuesday, November 5. I only got a few hours sleep, as Benni-connect picked me up early. Katja had gotten up real early to see me off. That was so wonderful of her. She also gratefully helped me out with the new guy at the desk who couldn’t understand what I was talking about. As I pulled out in the taxi, I suddenly realized this was my last time here. Tears came to my eyes. I felt very moved. That all faded when I nearly missed my connection in Madrid. The layover time was very short, and the plane was a bit late. I looked at the monitor and the flight to Chicago was not listed. I tried to find someone who could help and ended up in a wrong section of the airport. I ended up having to go through customs and as I was hustling to the gate with my heavy backpack I felt something twisted in my right knee and it started really hurting, so I had to hobble the rest of the way to the gate. They were boarding. But for some reason I got pulled out of the line for some additional security screening, where I was taken into a back room and they took swabs of everything. Finally, they realized I wasn’t a terrorist and I barely made it onto the plane just in time before they closed the gate door. It was a fitting adventure, especially considering how my travel started on this trip. I landed in Chicago, then caught my plane to Richmond, Virginia. God knows why an airline would have planned that route. I arrived in Richmond at about 10:00, then I had to pick up my car at Park n Go and drive an hour and 15 minutes to get home. But what a beautiful trip! In fact, what a beautiful journey it’s been to be coming to Albir Spain 13 times since 2012. What a beautiful journey it’s been to be part of the understanding of the Three Principles and be part of this (mostly) wonderful community. Wow, I just realized, this is my last travel blog. Thank you for listening all these years.

A special big shout-out and huge thank you to Chris Zarza for posting my travel blog entries over the last few years.

I am sure going to miss every one of you, as I retire on December 31 of this year…