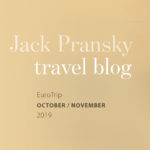 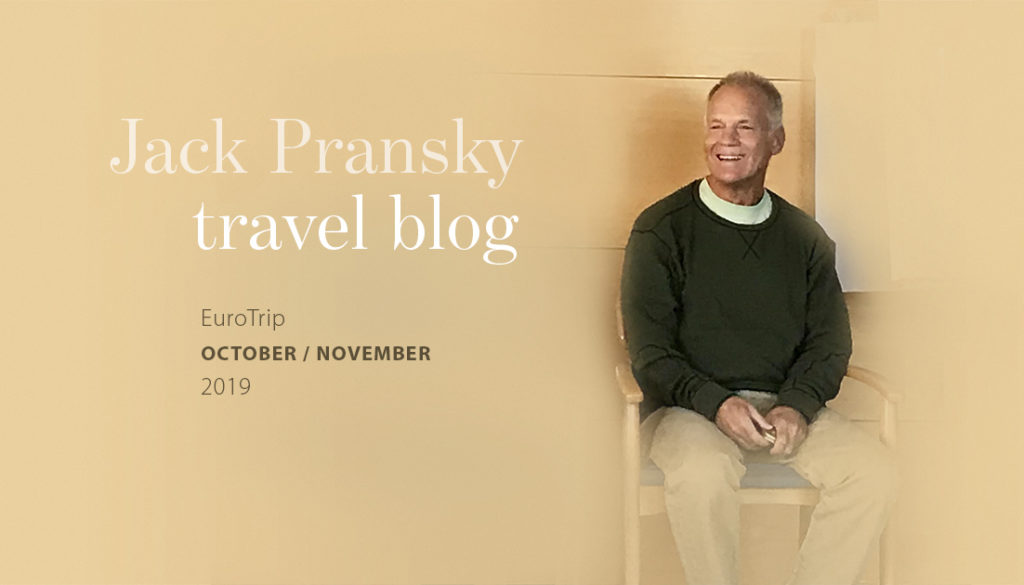 I am retiring. I started writing these blogs in 2014 on my first European tour, and I’ve been writing them every European trip since.

I know I must be ready to retire, because I’m getting too old for this. I’ve had rocky beginnings to trips before, and they don’t faze me so much—well, maybe they do at the time, but I easily get over it and have had great trips, despite many rocky starts. Nothing could’ve been rockier than my start to my Peru trip (I didn’t do a blog for that one), because when I arrived in Peru they wouldn’t let me into their country because my passport had less then six months before it expired—who knew? I was supposed to be conducting a training with my partner, Nicole, her first Three Principles training, but the government of Peru had other ideas, put me in custody at the airport, and they flew me back to Miami, Florida, where I paid through the nose to get an expedited passport, then flew back overnight the next day through San Salvador. I had staggered into the training that Nicole had already abley started, saying, “The show must go on.” That one was the rockiest start ever, but it also ended up being one of the greatest work trips ever.

So I should not have been surprised when three days before this trip I threw out my back doing nothing, and I was in agony Saturday and Sunday, especially while I packed. On Monday, I was able to get to a chiropractor, who said he had to treat me once in the morning and once later that afternoon because my back was spasming so bad and I had to leave the next day fairly early. And I should not have been surprised when I went to find my €300-500 in our new house in the place where I knew I had stashed it from my last trip, and it was not there! There were only two other possible places it could be, and it wasn’t there either. €300-500 gone, plus a very hurting back, and I hadn’t even started the trip yet. But, under the circumstances, I was in fairly good spirits.

Tuesday, October 22. After icing my back on and off all night I awoke to slightly less pain than I’d been experiencing. I thought of one other possible place my euros could be, had to crawl into a crawlspace to find it, and it was not there either. I’m not even going to speculate what could possibly have happened somewhere in the move from one house to another. Nonetheless, I said my goodbyes and drove off to Richmond, parked in the Park n Go lot, got on the first leg of my plane trip to Boston, and I noted how long I had to wait in Logan airport before my evening flight to Madrid. Then I happily busied myself answering emails backed up on me for a long time. While I was talking on the phone to my partner, I kept hearing these loud announcements in Spanish over the intercom system that were interfering with talking on the phone but I couldn’t understand a word of them. So about two hours early I decided to head over to the gate, only to discover to my utter shock that they had just closed the gate! They wouldn’t let me on, even though the plane was still there! I had read the itinerary wrong. The itinerary was written in international/military time, which I missed, so I read 17:20 as 7:20 PM, when the plane really left at 5:20 PM. It was now 4:55, so I missed the flight, after waiting beforehand for hours. I got so furious, forgetting everything I knew about the Principles, but mostly I was furious with myself for not paying close enough attention. The people at the gate said nothing could be done. So I called Iberia Airlines to tell them what happened, and they said, “The only thing we can do is to have you book another flight, which will cost you $3000.” I said, “You’ve got to be kidding.” They weren’t. “Can’t you just put me on another airline?” “No, this was not our fault.” To make matters more difficult, I was not the one who had booked my ticket; Sheela booked it for me through a travel agency—so they were the key to fixing this—but the travel agency was located in Spain, Sheela too, and it was now very late there and she was sleeping. So I sent her some frantic emails and texts, hoping she would somehow see them and be able to help me, because there was nothing I could do by myself on this end. And miracles, Sheela did wake up, had an uneasy feeling, saw I had written a bunch of emails, said, “That’s odd. Jack is supposed to be on the plane right now.” So she knew this was serious and called me, and then went into action. Sheela is the greatest logistical person! One of the things she reminded me was that if they didn’t let me on the plane, they would have taken off my bag; I had just assumed it was on its way to Alicante. If someone doesn’t make a flight they take the bag off. But everyone from Iberia Airlines had left! People working the desks at other airlines told me where my bag probably was, but I would’ve had to go out with security to get there and then couldn’t get back in because I didn’t have another ticket yet for a new flight. Finally, Sheela sorted the flight out and I can take a flight tomorrow evening on TAP Portugal airlines for a really good price. With that finally sorted, it was now about 10:30 PM. I thought I would stay in the airport overnight, but Nicole convinced me it would be better to find a hotel. But the hotels near the airport cost around $600. What?! No way! But I found a place through booking.com that looked reasonable. The problem was it was a few miles away. Taxi prices were also outrageous, so I took an Uber, which was still expensive but half the price. When I got there, I found a fairly run-down place with a shared bathroom that booking.com had failed to mention. I did not want a shared bathroom! I moved my backpacks and shoes up onto a chair in case there were cockroaches. Without my suitcase I had nothing but my clothes my back to sleep in, nothing to wash up with or brush my teeth, but by this time I was so exhausted, I just fell off to sleep.

Wednesday, October 23. It’s amazing how things can look the next day. Suddenly everything I knew about the Principles came back to me. I had my typical thought in these situations, “Oh well; that was an adventure.” I was reminded again: Who’s to say that any one moment is any more precious than any other moment? Each moment has an equal opportunity to be appreciated. We are the ones who decide that an arrival moment is better than an in-the-process-of-getting-there moment. The only thing that gets in our way is an expectation thought, followed by a comparison thought and a judgment thought. That’s what gets to us. We judge that a particular moment is not going the way we think it should go. So we get upset, or furious, but then new thought appears and the same situation looks like another adventure in life. The thing is, we can’t apply our little minds to this and have it come out the way we want. It takes new insight that we are the ones who put a value-thought over whether one moment is working out the way we wanted it to or not. Maybe that’s why the universe seems to place these obstacles in my way before I go on one of these trips. Maybe that I can wake up to this fact is what then makes the rest of the trip go so well. In this case, I’d better knock on wood.

I took a shower in the common bathroom—not the cleanest thing in the world—and cleaned my mouth as best I could. Then I walked out of the building and spotted a guy walking by, so I asked him where the nearest T (subway) station was. This very nice Venezuelan fellow said he was walking there now and I could tag along. I took the subway to the airport, making one switch to another line—I’m really familiar with the Boston transit system. It was ten times cheaper that way. I went to the C terminal to find Swissport, the contracted company that deals with baggage, and they didn’t have it. They told me I had to go to Iberia Airlines counter (E terminal) to see if they could find it. I walked over there to discover they didn’t open until 2:15. So I walked back to C terminal to check in for my next flight, now on TAP Portugal, figuring I’d go out again to find my luggage, because I had time. After checking in, I walked to the end of the terminal to find JetBlue customer service. As the originating flight, I had their baggage tag. They checked and told me they had given it to Iberia. So I walked back over to Terminal E to talk to Iberia. They were in no rush to help me and I waited a very long time; it was almost time for me to go back through security and board my other flight. They finally looked and said they didn’t have my bag. So I walked back to Terminal C and double chedcked with JetBlue. They said I had to file a missing luggage report when I landed in Alicate. All this with my back still hurting. I got on my flight to Lisbon, watched a pretty good monvie, and fell asleep for about an hour and a half.

Thursday, October 24. I’m in a fog from lack of sleep. Waiting in the Lisbon airport writing this blog, I heard someone call my name. It was Sandy, a member of the training group, whom I had not met in person. She was very kind in trying to help me out. I slept a little more on the plane to Alicante. Sheela and Katja picked me up, just like old times. Katja helped me file the lost baggage report. Arriving at the hotel, even while still in a fog, felt like old home week. I saw so many people I have very fond feelings for. My first order of business was to take a luxurious hot bath. Then Sally took me shopping. I bought a few warm weather clothes to hold me over; then the weather turned cold, so I’m still kind of in a pickle about what to wear in the morning for the training. Then I got a massage—absolutely necessary for my back—and even though it wasn’t the greatest massage, my back felt a lot better afterwards, so it was worth it. Then I went to dinner and saw more beautiful people. However, I missed my recovery day that I usually have before a training to adjust to jet lag, and I’m still kind of foggy. Gotta get some sleep.