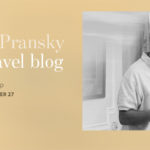 Sunday, October 27. This was a great training day. After not feeling like we were clicking last night, this morning right from the beginning I felt beautiful energy coming both from me, from Gabriela and from the group. We wanted to spend only a half-hour on insights and reflections from the day before, but the energy felt so good we shifted our plans and went a lot longer. Right away we did a deep listening activity in pairs, which also pointed the talkers to what intrigued them initially that made them want to pursue the Three Principles, and then what specific major insights they had that changed them or shifted them in any way as a result of hearing the Three Principles, and then when we got back to the group, besides hearing from the listeners, we asked them what does what they experienced themselves tell them about coaching and teaching others. Again, the energy was high. In the latter part of the morning after a break, I did a coaching session with a volunteer from the group in front of the entire group. Both Gabriela and I, during the session, took people behind the scenes in terms of what was going on within me during the session. It could not have worked better. I really wish I had gotten that on tape. Then, after our long afternoon-off break, we had them do practice coaching with each other in triads; one coach, one coachee, and one observer. When they came back, we asked about their listening and their coaching experience. We did not get very far with processing it, so we will begin with that again in the morning. After dinner, we ended the night with the Lise’s singing workshop, where people who volunteer blossom in front of our eyes. It’s always a beautiful session and really helps to further group bonding.\\ The day began when I woke up in the morning and discovered that my back only hurt a tiny bit. This was a major improvement. I’m willing to attribute this to Marcelo’s chiropractic work on me. The funny thing is, Marcelo thought he was coming to a training with George Pransky and was shocked when he found out it wasn’t George at all. He hadn’t even heard of me. By the end of the first day though, he came up to me and told me that he came to the session with the right Pransky. Anyway, my back felt good enough for me to walk/run up to the lighthouse in the morning, just after sunrise. Given the fact that I hadn’t had much exercise at all since my back began to hurt, this felt great. And, as usual, it was beautiful up there. Maybe that’s why I went into the first session with such good energy. That afternoon during the afternoon break I again began walking up toward the lighthouse because Sheela and Katja had never taken the path down to the cove from that trail, so I took them there and it never ceases to amaze me what a beautiful feeling exists down at that cove, sitting on the rocks right near the water, and listening to the waves lapping against the rocky shore. Truly a great day all around.\\The only downside was I got a note from my partner that the basement of our house had flooded in a huge rainstorm, and I felt so bad for her and that I wasn’t there to help her during this time