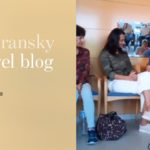 Monday, October 28. Another great training day, the highlight being another coaching demonstration. This time, however, the demonstration happened between two volunteers from the group. Turned out to be a very tough client, because the coachee was so nervous and could barely articulate his problem or much of anything else. At first the coach tried to get him to go somewhere, leaving deep listening and connection behind. Gabriela and I jumped in the few times to see what was going on behind the scenes and redirect. And then toward the end of the session, the coach really connected with the coachee, he relaxed, and actually had an insight. It was a beautiful demonstration of the kinds of things we can run into as a coach, and as Gabriela said, the fallback position when we don’t know where were going is always getting back to the basics: deep listening, connection, and presence. We also had people come in pairs, explain the Principles to their partner without using the intellect. After debriefing those, then we had everyone do another practice coaching session in pairs. The whole thing really worked out well. But it feels to me like we’re squashing everything in quicker than I would like; however, we don’t really have a choice because tomorrow is the last day. I’ve had to deal with something this time that I’ve never had to deal with before in a long training. Someone in the group coming in inebriated. I had to have a talk with this person, which was not easy, but to the person’s credit the trainee came back for the last session, and sober. The other interesting thing I’m noticing is that many people want some of my time privately. And I’m glad to give it, but I must admit I feel very exhausted.

Here’s a link to a video clip of one of our sessions.