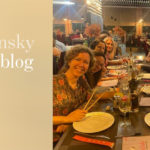 Tuesday, October 29. Well, this was a day for the annals. The last day of my training retreat at the last of my training retreats before retirement. Not only was it a great training day again, but I was lavished with love and appreciation. I’ll get to that later. First, before the training began, I did a one-on-one coaching session, with Laura observing. In the training itself, all we had time for was one more one-on-one coaching so during the entire retreat everyone had a chance to be a coach, a coachee and an observer. Next, people had noted on their initial intake forms a few categories to which they would like attention paid, so we divided the group into small groups on 1) Dealing with addictions, which Liliana facilitated 2) Having impact on a group in a short time period, which Gabriela facilitated, and 3) Working with couples, which I facilitated. I heard all the small groups went very well; the one I was in went spectacularly. Then it was time for lunch. Immediately after we ate I took a walk-talk with Angela down by the sea, which was wonderful. Today we did not have a very long lunch break, so we reconvened after an hour and ½ and did our final closing circle. Very touching. I had said before that I don’t know really what makes the magic happen in the training retreat like this, especially the last two years, but really I think it’s the feeling. Creating that beautiful, loving feeling in the group that everyone comes to feel. I was taken very much by surprise when my planning team, Gabriela, Katja and Sheela presented me with a beautiful bound book that on the outside said Albir 2012-2019 and showed a picture of the Albir beach, which I would’ve been very happy with. But inside offered pages of beautiful pictures of the trainings that I and I and Gabriela and I have conducted over the years and some of the adventures we had, and interspersed with beautiful statements to me written from many participants. I really didn’t expect this. I was extremely touched and almost moved to tears. As I write this I haven’t even had a chance to look at it yet, because I need to give myself some secluded time with it. On top of that we had our closing circle, which was also very touching, especially when Gabriela told me how much she loved working with me and what I meant to her. My eyes really filled then. We closed the retreat with the song, “That’s What Friends Are For,” everyone singing along with the chorus together; another very moving moment. Right now I’m speechless. I think most people went out to dinner, but I had to go off by myself away from the crowd, and I don’t really care what happens for the rest of the evening. It may take me a while to absorb this one.