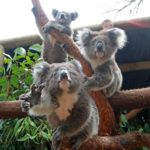 I didn’t bring my camera today, so I borrowed this photo form Dean Reese-Evan’s FB page. 🙂

Friday, March 2. I’m becoming a walking fool. Once again I walked the 5.5 km to Manly to catch the ferry back into Sydney to meet up with Dean. Just as I’m walking off the ferry and pull out my cell phone to call Dean to tell him I’m here, there he was standing on the dock right where the passengers get off. He had just gotten there. Such timing! And he didn’t even know I was taking that particular ferry. So we hopped on the subway train and headed to eat lunch at his favorite restaurant, which, knowing Dean, is obviously a very healthy, organic place. It was really good, too. Dean and I go back about 11 years, when he called me up while visiting the States—apparently the Gabriela had told him he had to meet me—and Amy and I met up with him in the White Mountains of New Hampshire. We hit it off really well, and then when Amy and I did our first UK training, which was the first after Roger Mills, not only did Dean and Merryn put us up, but they very generously took us all around England and Wales to see the sights. Dean and I had a real nice lunch and talk, and we chatted a little bit but not too much about our upcoming training. Then, when I found out that this organic restaurant was in Bondi, and Bondi has the most famous surfing beach in Sydney, when Dean went off to pick up Cat in the airport, I took a bus to the beach. And what a beach it is! The waves were roaring, and many surfers were out. I noticed that a lot of women on this beach, in fact in Australia in general, are really beautiful. What I really wanted to was to lie on the beach and read my book, so that’s exactly what I did—very happily. I think I fell asleep for a while, and I realized when I woke up it was starting to get late. So I negotiated the bus, train, and ferry back to Manly, ate some more fish and chips (bad boy) that was highly recommended, and walked the 5.5 km back in the dark to a cacophony of kookaburras and cockatoos. This time I knew I wouldn’t get lost, as I really paid close attention. Tomorrow it’s back to work, the last of my trainings in Australia.