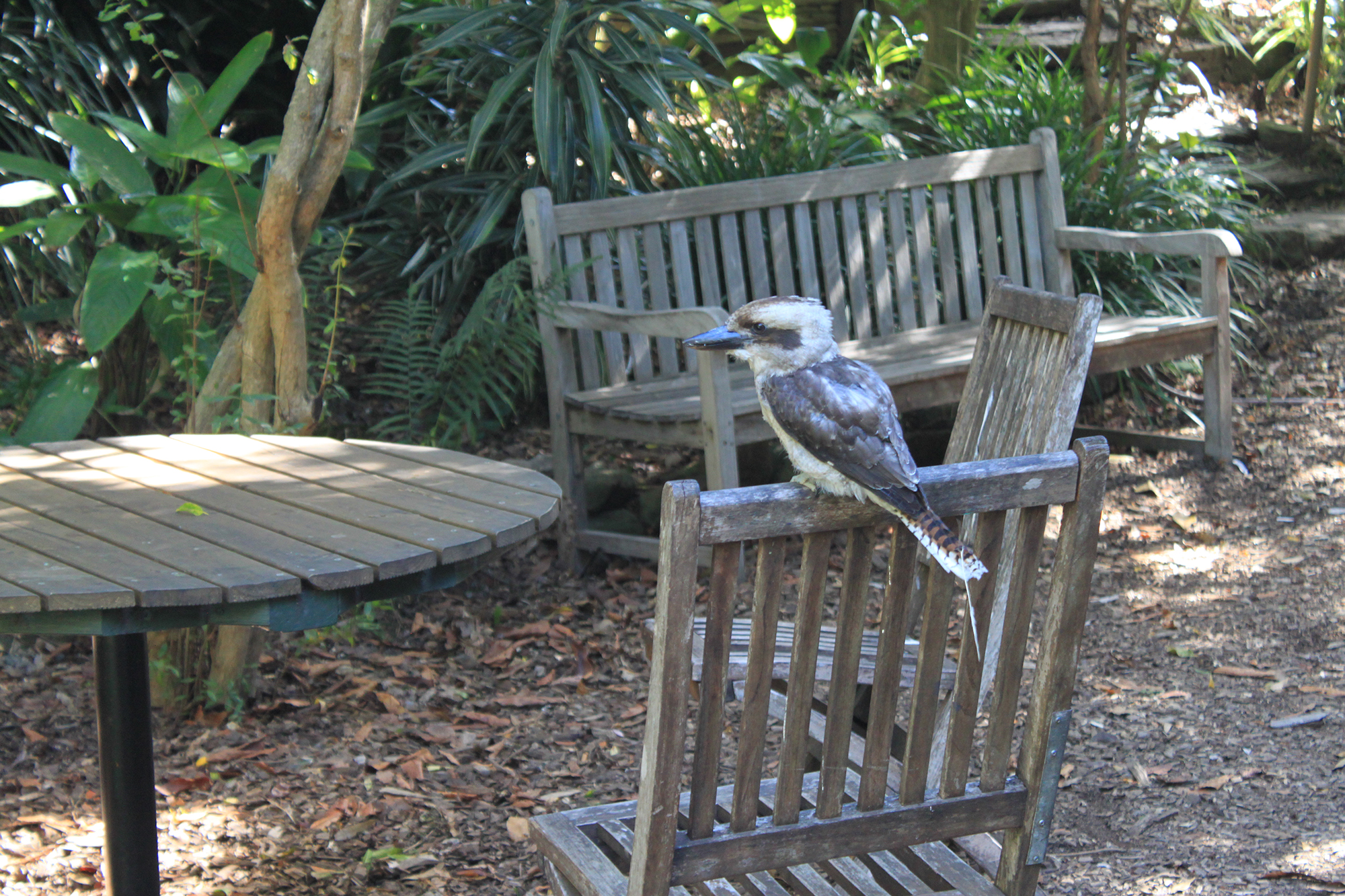 Wednesday, February 28. This day may have taken over as my favorite day of the trip. If not, it was right up there with the best of them. I absolutely loved it. I left the house by 10:00 AM, having gotten instructions by my hosts that I very carefully wrote down, and took a 5.5 km walk from the suburb of Sydney named Clontarf, where I’m staying, to the town of Manly to catch a ferry into Sydney. I got an all-day pass for $20. The ferry ride through Sydney Harbor was beautiful, and suddenly there before me, stood the very prominent and outstanding Sydney Opera House, the one that looks like a building on sails. That was one of those places I thought I would never get to in my life, but when the ferry docked, there I was. First I walked up  the many Opera House stairs, then walked into the very beautiful Royal Botanical Gardens, which could be the most beautiful city park I’ve ever seen. I walked my ass off all through the park, thoroughly enjoying being totally by myself, , not having to talk with anyone, all  and taking tons of photos with my beautiful found camera. I had a blast! The park is very large so after much walking around it, then I walked across the city to and through the Wynyard underground walking tunnel, where just before it I luckily bumped into another great foodcourt, where, in keeping with my ethnic meal sampling, had a Vietnamese Pho rice noodle bowl. I walked all the way to King’s Wharf, and after walking around there a bit, I went back to the Wynyard underground and took a train to North Sydney, where someone had tipped me off to a place called Wendy’s Secret Garden. This is one of the most peaceful, serene places I have been to, despite that you can hear city noise off in the distance. The After walking through the paths, I sat down at an outdoor table to take a much-needed load off my feet. With many birds chirping a strange Australian language, and sitting in the jungle-like surroundings, I just felt like meditating. So I closed my eyes, bathed in the bird sounds, and asked Universal Mind to help me see something new about a personal problem I’m experiencing. It was so incredibly peaceful! After a while, I opened my eyes to see a large bird, a species of which I’ve never seen before, standing on the back of a chair about 4 feet away from me, staring right into my eyes. This bird had a large very pointy beak and all of a sudden I got a hit of fear that if it wanted to come at me, it could peck my eyes out in a second. But something told me to sit through my fear and the two of us stared at each other, right in each other’s eyes, for a very long time, until a wild turkey-looking thing ran up behind me and the bird flew away onto a branch, still staying close. It was really an amazing experience. As I was walking away I realized the message I got was when one has fear, it is possible to sit through it and be still, and it will pass, and when it does, treasures await. Not unlike the Richard and the Caves story in my book, Seduced by Consciousness. Then I walked back to the train station, took the train to Circular Quay, and caught the ferry back across the harbor to Manly. By this time it was getting late, so I walked over to the beach while looking for a restaurant and bumped into a dumpling place, where I could get gluten-free dumplings. I wanted to take a bus back to the house, but by this time of the evening they run very sporadically, so again I walked the 5.5 km through the beautiful walkway along the shore back to the house. There was one catch. I got totally lost. But this time my legs are aching, and I’m so tired. I realized somewhere along the way I had lost the sheet of paper with all the information on it about where I was supposed to go, the street number of the house, the phone numbers in case it got lost—everything. I took a couple of wrong turns and the 5.5 km tuned more like 7.5. I finally got to the street on supposed to be on, but I can’t remember the number and it’s a long street. By this time it was getting dark and I could no longer read my map. I didn’t know what to do. So I called Kari-Anita. Luckily she was home and was able to give me the number of the house. So I walked a little further on and found it. By this time I was completely and utterly exhausted and spent. Luckily, too, this house has the greatest bathtub, so that’s where I soaked my aching legs. By the time I went to sleep, my back was really hurting, so where one would think I would’ve slept like a rock, I ended up not getting that many hours. But even with getting lost and hurting, it was a truly great day!